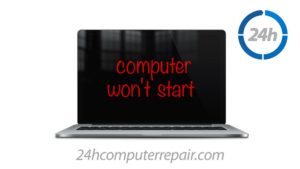 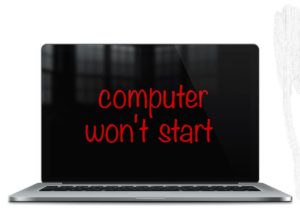 There could be a number of problems with your computer if your computer isn’t starting up. Firstly the power supply unit could be faulty which won’t allow the pc to start up or will keep the pc in a boot loop. Another fault could be that the hard drive is faulty. This doesn’t let the computer start up as there is nothing for the computer to boot off. Windows could also prevent the computer from starting up as windows could have corrupted files which wouldn’t allow the computer to start up. This is because the data in the files can’t be accessed so it prevents start-up. Another factor affecting start-up is RAM. RAM is random access memory. This is the memory programs use to start up and if there is not of this nothing can start up.

The computer could fail to start up due to bad electrical connection. This is a very common causes of computer failure in older computers. The constant heating and cooling of the computer, atmospheric conditions and dust can all play a part. Most of the time the issue can be solved in just a few minutes. If it cannot be solved in a few minutes then the best thing to do is to take your pc to a specialist.

Another problem could be that the It is a very common cause of boot failure that a memory module is not properly connecting with the motherboard. If just one of the many pins on the module fail to connect in the motherboard slot, the computer will not start. You will not hear the usual beep, nor will any text appear on the screen when you try to boot. The computer will be lifeless when you turn it on except perhaps for the case and CPU fans. These are the many problems that prevent your pc from starting up. In all cases it is best to get in contact with a technician and let them deal with these problems.