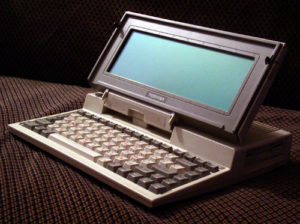 The world’s first mass-market laptop computer – Everyone uses laptops and computers nearly every day of their lives. But have you ever wondered what he first laptop was and how the technology has improved over the years.

The first mass-market laptop was Toshiba T1100. This laptop was made 33 years ago in 1985. And what’s a hard drive? This laptop computer ran off floppy disks. For those of who you don’t know, a floppy disk is a flexible removable magnetic disk (typically encased in a hard plastic shell) for storing data. It has a 4.77 MHz Intel 80C88 CPU, and a monochrome LCD capable of displaying 80×25 text and 640×200 CGA graphics. Its original price was roughly £1400 at the time and roughly £3300 in today’s price.

Later on, about a year later Toshiba released an improved version of this laptop called the Toshiba T1100 plus. The T1100 PLUS is a later model of this laptop, released to the market in 1986. The significant differences to the T1100 are the mew 80C86 CPU with 7.16 MHz or 4.77 MHz of operation. And there is RAM expandable to 640kb with two internal disk drives. These were the first mass-market laptop computers back in 1985.

The world has come a long way in technology the way technology has improved is incredible. From then when we ha 640kb of RAM to now where some computers have been made which can have up to 192GB of RAM. Now that’s a huge improvement. Also the definitions of screens has improved drastically from low quality to high definition to 4k to 8k which is so advanced that there is hardly any hardware to use with his definition as everything else is either in HD or 4k.

If you ever need any help with problems with your laptop or computer, contact us today on 0121 673 2579 or visit us at Birmingham Computer Repair