Home
›Blog›Is it the end for the MacBook Air?

Is it the end for the MacBook Air? 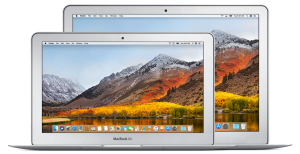 End of Macbook Air – On January 15th, it was the 10 anniversary of the introduction of the MacBook Air by Steve Jobs on stage at Macworld. It was one of the thinnest and lightest laptops of its time and sent competitors racing to make their own devices as thin and light as the MacBook Air. However, apples customers think that it’s time to shelf the MacBook Air as apple has barely been updating the laptop over the years.

When this sleek laptop was first announced, it was revealed that apple has made some very contentious cuts including the lack of a DVD drive and the fact that it only has one USB 2.0 port. Adapters were needed to connect the laptop to VGA and DVI displays and the display itself uses a Micro-DVI connector. In today’s time with ports such as USB Type-C, having just a couple of ports isn’t as shocking as it was back then.

Over the years, as the MacBook gained another USB port, added an 11.6 inch alongside the 13.3 inch default, got faster processes, much longer battery life and switched to Mini DisplayPort. After these significant changes the Air has become one of the consumer’s most favourable laptops. Over these time periods the Air has received numerous rewards however in today’s day and age the MacBook Air has lost its relevance as they focused more of their attentions on the 12 inch MacBook.

The MacBook Air still uses old basic components and chassis design that it had in 2010. The only thing they updated was the processor to a fifth gen Intel Broadwell CPU in 2017. That is still not a lot as they had 7th and 8th gen CPU’s available at the time. Any other pc on the market with components that outdated is worth near to nothing wear as the Air starts at £949.

Overall, I think that due to the lack of focus on the MacBook Air, apple is going to leave the device as it is instead of updating it any further and eventually it will go out of production.
If you’re interested in repairing your laptop or computer, contact Birmingham Computer Repairs today on 0121 673 2579.